Hey Guys!
Thanks for stopping by the blog to check out the cover reveal for the upcoming YA fantasy/romance novel:
Shift (Firstborn #2) by Raine Thomas

Ready for some cover awesomeness? 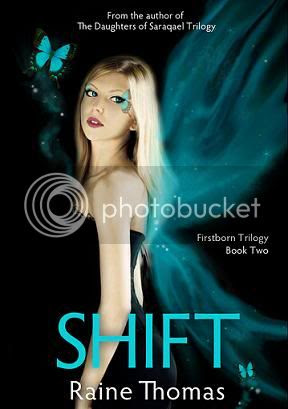 Having the ability to shapeshift, Sophia is familiar with change. But even she feels the rising tension in her homeland.

A shadowy male and deadly beast reside in their midst. The births of the newest Kynzesti loom. Hostile Mercesti continue to hunt for the Elder Scroll, and a traumatized female is too afraid to use her abilities to stop them.

Topping off Sophia’s stress is Quincy, the male she’s convinced can’t stand her. She rues the loss of their friendship, but can’t figure out how to move past it. She’ll soon learn, however, that mending that rift bears more significance than she ever imagined.

The search for the Elder Scroll takes on unexpected urgency, and Sophia finds herself in a race across the mainland. To stop the Mercesti led by Eirik, she and her companions must get past their differences and unite against them. If they don’t, Eirik will acquire the immense power he seeks, and two of the beings Sophia loves most will die.

Sidenote: I cannot wait to read Shift. Defy (book 1) in this series was amazing. #TeamZachariahForever :D Read my review for Defy here :)

Shift by Raine Thomas will be released August 24th 2012 by Iambe Books. Be sure to add it to your To-Be-Read pile on Goodreads!

So what did you think of the cover?

Let me know. Can't wait to see what you guys think and thanks for reading lovelies :)